“Sport and fitness are powering a new lifestyle shift for women around the world.” Last week I had the privilege of representing Nike Training Club with the Nike Master Trainer team at the Nike Women’s Showcase in New York City. It was a humbling, empowering and tremendous experience. Attendees ranged from magazine editors, digital publishers, members of the media, and influencers from around the globe. The event kick-off took place at Spring Studios in Tribeca, 150,000 square feet of creative space waiting to be turned into a Nike wonderland. The air created a buzz and aspirational energy that was contagious.

President and CEO of Nike, Mark Parker, kicked off the day with a presentation that unveiled the Spring/Summer 2015 collections and the brand’s plans for Women’s training. The full-court runway included a roster of athletes and female influencers from all over the world. Why is this a big deal? Women have been using their rapidly increasing spending power to change the way companies operate, and Nike is no exception. Approximately $5 billion in revenue a year is collected from women: that’s just about $18 of every $100. And that number has nowhere to go but up. Nike plans to expand its sales to women by 40 percent within the next four years. Read more details here. The showcase continued with one-on-one conversations about all things NTC and Nike+ Running, gear from all five of the upcoming shoppable collections and workouts at the top studios in New York City led by the city’s top trainers. The event culminated with a massive group workout at Cirpriani, which transformed from elegant restaurant and venue to the baddest backdrop {ever} to break a sweat. The 45 minute workout was comprised of six phases which ranged from a yoga based warm up and cool down to high intensity tabatas. To confirm, the below isn’t a Daft Punk concert. It’s an NTC workout. Afterward we mixed, mingled and took advantage of every photo opp over coconut waters, green juices and flutes champagne…all served by handsome gents in suits and ties. Nike really does nail each and every last detail! Amy Montagne, a vice president and general manager of Nike’s women’s line, shrugged off a questions about the brand’s competition. Her response was spot on and should be applied to all facets of life:

“Our competition is ourselves. And our future is about the potential we have.”

Thank you Nike for the incredible experience, and for the journey that has been, and the moments to come. #keepitmoving 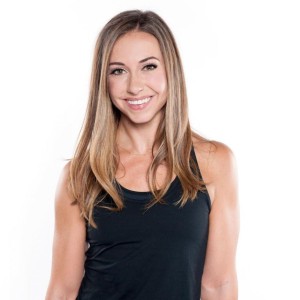